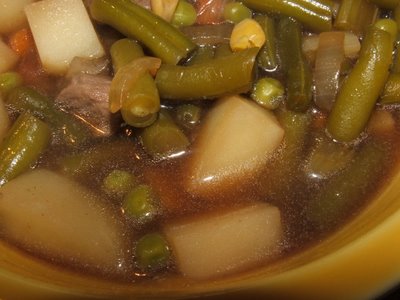 At 6:00 this morning, I was sitting on the couch, fighting off the affection of Sylvester, who feels the need to show Momma loves whenever she sits down with her laptop. So, since Vester was snugged up against the fan on the left side of my laptop (where the fan blows toasty air), his paw was sitting on the control key, which rendered me useless until I could get him to move.
I was admiring the fish tank (which I should attempt to take a picture of someday) and it came to me….vegetable beef soup. During my normal morning routine, I schlepped to the chest freezer in the basement and pulled out a 1-pound package of organic beef stew meat to make sure it was defrosted when I got home.
Boy, does the kitchen smell good.
The Man wanted noodles, so I cooked up some egg noodles for him and he puts as much as he wants into each bowl of soup. He also had some crusty French bread.
Warning: I like my soup with lots of veggies!
Vegetable Beef Soup
1 pound beef stew meat
3/4 cup chopped celery
3/4 cup chopped onion
3/4 cup frozen peas
3/4 cup frozen green beans
3/4 cup frozen corn
3/4 cup chopped carrots
4-5 potatoes, peeled and chopped
2- 32 oz containers of beef stock
Olive oil
Salt and pepper to taste
Rinse the stew meat; remove visible fat and then cut into small pieces. Toss a few teaspoons of olive oil in the bottom of a 6-quart stock pot and fire it up. When the oil is heated, add the meat, onion, celery, and carrots (stir occasionally). When the meat is cooked most of the way through, add the beef stock and bring to a boil.
Once the soup is boiling, add the peas, beans, carrots and potatoes and cover, reducing the heat to medium. Stir every few minutes. When the potatoes are fork-tender, the soup is done.
Remove any cat hair from the bowls and ladle it up.